Dedication to my mother…

First I’d like to thank everyone here today for their role in honoring my mother, including the Pastor, who has helped orchestrate this service, and “S”, who came on short notice to sing Amazing Grace – a special thanks to my sisters and step-father for bestowing me the honor to reflect upon my mother’s life and memories.

‘Ginny’ came into this world in 1943, one of 6 girls born to Pauline and Charles.   The family was raised in Hyde Park, MA where Ginny stayed until 1974.  She and her then husband decided to relocate their 3 young children to the southern-most section of Plymouth named Cedarville.  Cedarville, then barely developed, would serve as a stark contrast to the city in which she was accustomed.  This would be the first of many sacrifices my mother would make along her journey.

In 1983, with a failed marriage and 3 children to support, my mother worked multiple jobs.  One of those jobs, a social-care worker, required her to walk to Sagamore Beach multiple times per week.  Yes, ‘walk’ is right, although she’d rarely acknowledge it years later – as these would serve to be tough years in our family.  A car was never a given.

Her walk would lead her to more than just a job, however.  She was caring for an elderly woman whose son was a mid-aged gentleman named William.   And gentleman was the perfect way to describe him.  She would fall in love and relocate the family to Bourne – ironically the town in which we all still reside.  They would wed in 1984.
This would be the first of many sacrifices my mother would make along her journey.
Hard times, however, were not yet in the rear view, as William had the misfortune of suffering from liver disease. William’s liver was failing at a rapid pace. My mother was suddenly caring for him the way she had cared for his mother. William needed a liver transplant. At the time, BCBS still considered liver transplants experimental. And our family certainly didn’t have the funds to afford such an operation. So what would Ginny do?

Well Ginny being Ginny meant you’d fight. ‘Experimental’ wasn’t good enough, considering the insurance company had just paid for young JF’s operation – an 11- month old from Bridgewater, MA. And fight she did! She was at the forefront of a political and media debate over humanitarianism, fighting the largest insurance carrier in the state, mind you, and finally winning, forever changing the nation’s organ transplant policy. But had she won? Not really, she had lost poor William along the way. Time ticked by too fast, and by the time Blue Cross approved reimbursement for the operation it was too late. She was devastated.

But devastation can only be temporary, and eventually she would meet Raymond. Marrying in ’86, Raymond and my mother would go on to build a special partnership that would last them the next 25 plus years. They would forge a strong family-life, providing structure and safety for the kids and grandchildren. They would also build a successful business enterprise, developing land and constructing homes for local families. By that time Ginny had entered the real estate industry – a natural fit for her can-do attitude. She was great with numbers, possessed a true entrepreneurial spirit and had tremendous problemsolving skills. She loved to put deals together. Her intense focus, sincere interest in people, and her unabashed honesty would help form a small real estate monopoly in Sagamore Beach. It seemed every home for sale had her red sign proudly displayed. But what made her so impactful was that she was part of the community. She became part of the fabric of Bourne in the same way she had inserted herself in the insurance battle years prior. She was fearless and she was a difference-maker. Still to this day I encounter people who make the connection that she was my mother only to inform me that she sold them their first house. Many go on to tell me that they wouldn’t have been able to do it without her. She used creativity and generosity to get things done.

She used creativity and generosity to get things done.

Pastor, I have to make a confession – I’m not an overly religious person; however, my kids often ask me what the bible is……I go on to explain that it’s a collection of stories designed to teach a lesson. Those lessons are the foundation of our morals, or better judgment.

I was my nephew’s age when ma gave me a $20 bill and told me to grab dinner from McDonald’s. When I pulled up to the drive-through I encountered a friend working the window. He handed me the food but wouldn’t accept my money. Upon my arrival home, I told my mother the ‘good’ news and handed her back the money. To my dismay, Ginny reprimanded me, reminding me that someone had paid for that food and it wasn’t my ‘friend’. Off I went, back to McDonalds, to pay for the meal. I often wonder if I should have just kept the $20!!

After having completed a development in Bourne, there became wide-spread speculation that an illegal operation was taking place on a parcel of land that abutted the neighborhood. Complaints and concerns were raised over the impact of this activity to the local water supply and its future effects. My mother and Raymond were at the forefront of the controversy, having felt obliged to support the neighbors whom they sold the land to. Town officials, however, went silent. 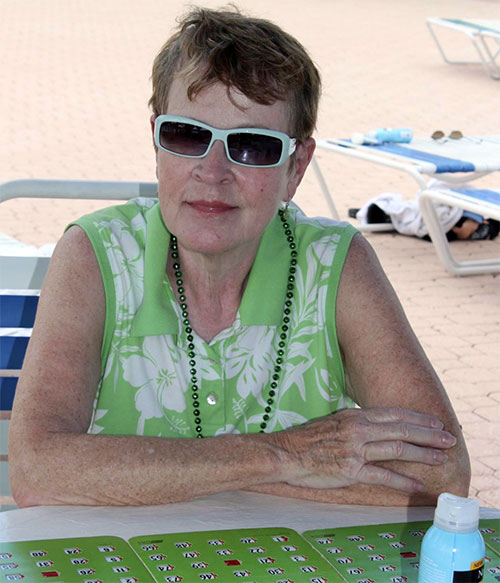 The tipping point came when Raymond crossed paths with the parcel owner, who took umbrage to the reported complaints. A physical altercation ensued. My mother was pissed.

A week later a plane was flying above the parcel. Aerial photos were being taken, capturing images of commercial activities, unregistered vehicles, and buildings for which no permits filed or approvals granted.

Those photo’s made the front page of the Cape Cod Times.

My final story takes place in the hallway of the 7th floor of Mass General Hospital. We had just learned that my mother’s 1st cocktail was no longer containing her cancer. She would begin her 2nd and final option. It was a highly emotional moment, one of defeat in a way, and certainly sorrow. My mother, attempting to minimize the news proclaimed to her entourage “I feel good, my blood pressure is great, I played golf the other day, and you know something, I can still kick their ass”.

Raymond, thank you for sharing your passion for golf with my mother. Golf became a vehicle for her to showcase her competitive spirit and her athletic ability during retirement, and served as a great social venue as well. Ultimately it became a distraction and an escape. No circumstance would strip her of her fighting spirit, nor would she stop protecting us from something she knew would be her ultimate demise. She was nothing short of stoic in her darkest hours, maintaining her signature poise and steady presence.

So in conclusion, let this moment serve as a reminder that yes, Ginny is no longer with us in body – but her spirit, her stories, her lessons continue. If you look around, you will see her through her grandchildren. Lizzy,, remain strong-willed and honest. Mikey and Josh, keep that competitive spirit alive. Matt, continue to be a brilliant negotiator. Michael, stay determined and focused. Angelina and Emma, let those beautiful blue eyes sparkle. Dom, share that big warm smile with the world. And Brittany, remember that destruction is only temporary, never stop fighting.

To my sisters, let this site provide us a continuous reminder of the countless lessons she worked so hard to impart.